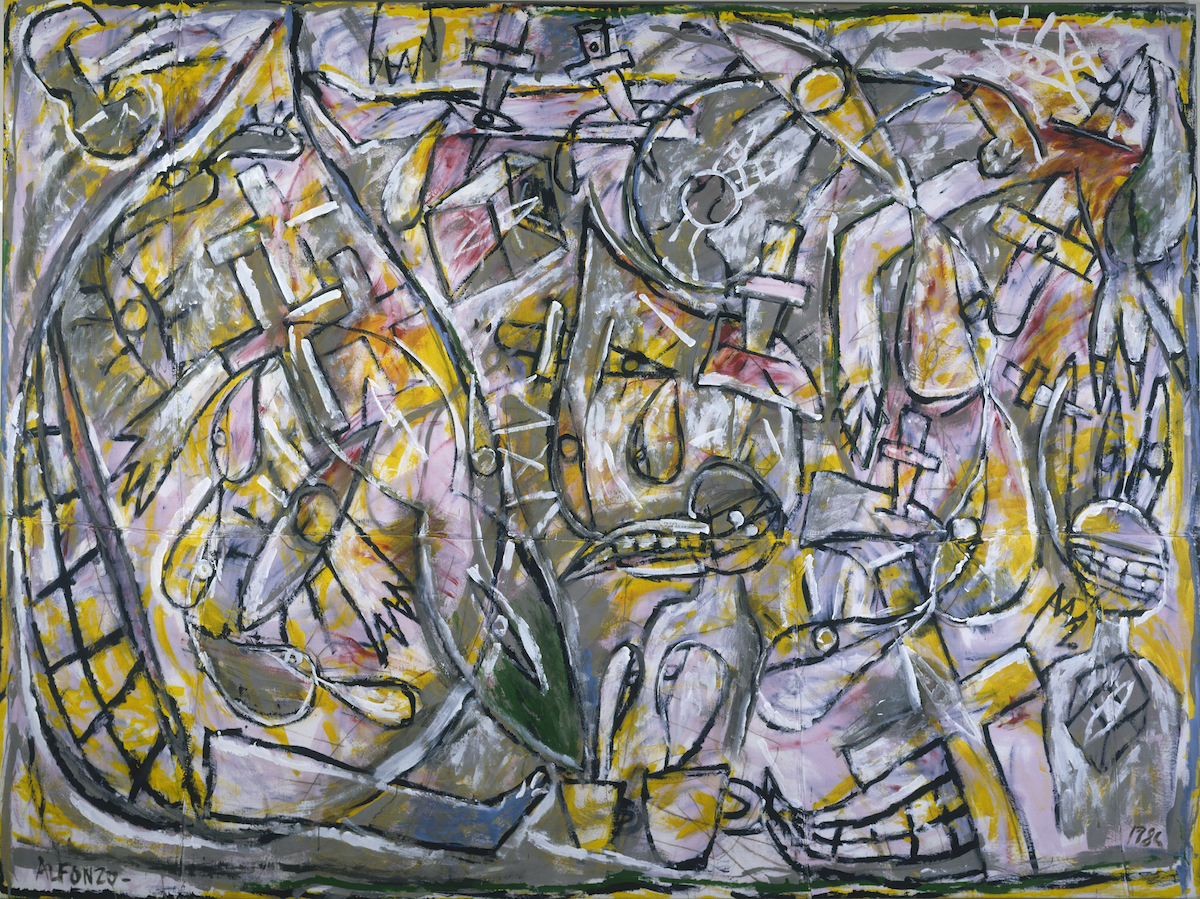 Carlos Alfonzo: Painting is the latest exhibition devoted to this Cuban-born artist, currently on view at Fredric Snitzer Gallery in Miami. Painting traces the final years of Alfonzo’s life and art, in which his dialogue with death becomes the central theme.

Having barely reached the age of 40, at the peak of his career, Alfonzo died in Miami in February 1991, from AIDS-related complications. His prolific output—which included drawing, painting, sculpture, pottery, and public artworks—is the testimony of a tormented individual on a perpetual search for reconciliation.

Carlos Alfonzo was born in Havana in 1950. He graduated from the San Alejandro Academy in 1973, and later from the University of Havana in Art History. His work quickly achieved fame on the island, and was acquired by the Museo Nacional de Bellas Artes. In 1977, the museum presented the exhibition Experimentos de Carlos José Alfonzo.

At the time Alfonzo left Cuba, the University of Havana was working on an exhibition of his work, which was immediately suspended. The essay for the catalogue, by Gerardo Mosquera, was never published. The name of Carlos Alfonzo was erased from the list of Cuban artists.

Even at this early stage, Alfonzo’s work stood out for his experiments with supporting materials, such as crumpled cardboard, cloth sacking, and newspapers, and for a passion for literature that prompted him to incorporate handwriting into his art. Favorite writers echo throughout his early work, including José Lezama Lima, Eliseo Diego, and Federico García Lorca.

Scorned as a dissident and a homosexual, Alfonzo left the island in July 1980. In his last days in Havana, when he was under house arrest, he created murals—now vanished—on the walls of his home, a defense against not only a ruthless outside world but his own anguish.

The sea would be not only a physical transit between the close but divided poles of Havana and Miami, but the expression of that anguished inner world, and the endless search for harmony, beauty, and reconciliation.

Arriving in Miami, Alfonzo reconfigured his personal universe into the particular symbiosis that would distinguish his mature work. Symbols from many sources—Afro-Cuban, Catholic, Rosicrucian, tarot, and more—came together in unquiet harmony, battling for existence. Works from this period include Where Tears Can’t Stop and his public-art, tile-work mural Ceremonia de los Trópicos (both from 1986.)

As his art evolved, the latent jungle of symbols in his work gave way to a focus on the body. Specifically, the head—a head chopped off at neck level. As an expression of Alfonzo’s inner world, this solitary head always includes Elegguá, one of the main orishas of Santería. Ruler of paths and crossroads, closely related to destiny and creation, Elegguá had already appeared in previous work. Alfonzo’s universe became progressively darker. The atmosphere became an ominous prediction, and the head, a desperate scream.

Important events took place in Alfonzo´s life in 1990. A visit from his mother, Delia Espina Suarez, brought news of his father´s death. In December, weakened by AIDS, Alfonzo was hospitalized for the first time at South Miami Hospital.

The show includes two works titled Screaming Head, both made in 1990. With chilling simplicity and elegance, Screaming Head (dated November 1990) succeeds in capturing, in a few lines, a whirlwind of anguish, where tears and screams are locked in an inseparable dialogue.

Still Life with AIDS Victim (1990) also dates from this period. Here, a resonance with Francis Bacon—another artist caught up in the heartbreaking tragedy and losses caused by the virus—is a key element. At the center of the painting a figure, gagged and lying on a hospital bed amid medical paraphernalia, is cut by the sharp edges of a black box.

The painting—with painful lines and colors with Cubist, Expressionist and biomorphic implications—uses a palette of sepia, black, and white. A halo-like light restores humanity to the central figure. At the upper left, like an epitaph, an eye that is also a nail embraces an inverted cross, completing the sense of the piece.

Alfonzo´s work on the topic of AIDS first came to public attention in the 1980s, when the disease became a global pandemic. Smile Under Attack (1987) was included in the iconic exhibition Art Against A.I.D.S., presented at the Frances Wolfson Art Gallery, Miami Dade College, and is also the catalogue cover.

By then, Alfonzo’s art had gained international recognition. His work was included in Cuban Fantasies (Kouros Gallery, New York, 1983); The Miami Generation: Nine Cuban-American Artists (Cuban Museum of Art and Culture, 1983–1984); Hispanic Art in the United States: Thirty Contemporary Painters and Sculptors (The Museum of Fine Arts, Houston, 1987); Outside Cuba: Contemporary Cuban Visual Artists (University of Miami, 1988), among many others.

Art historians and curators Giulio V. Blanc, Julia P. Herzberg, Olga Viso, and Cesar Trasobares have written about Alfonzo and his work, and they remain important references on his art.

In 1990, the magazine ARTnews listed Alfonzo as one of “ten artists to watch” in the Nineties. In September, 1990, the Bass Museum opened the final show during the artist’s lifetime. In 1991, soon after his death, his work was included in the Whitney Bienal. In 1998, the exhibition Triumph of the Spirit: Carlos Alfonzo, A Survey, 1975 –1991 premiered at the Miami Art Museum (MAM), and traveled to the Hirshhorn Museum in Washington, DC.

In Alfonzo’s final chapter, martyrdom became an essential topic. In works like Home (1990), supplicant figures on their knees are supported by ethereal beings, recalling the theme of The Annunciation. Eminently monochromatic, these paintings are directly related to Habitual—Alfonzo’s only artist’s book, also from 1990—as a summary of his life and work.

A Message From Publisher Howard Farber… And a Gift For You.