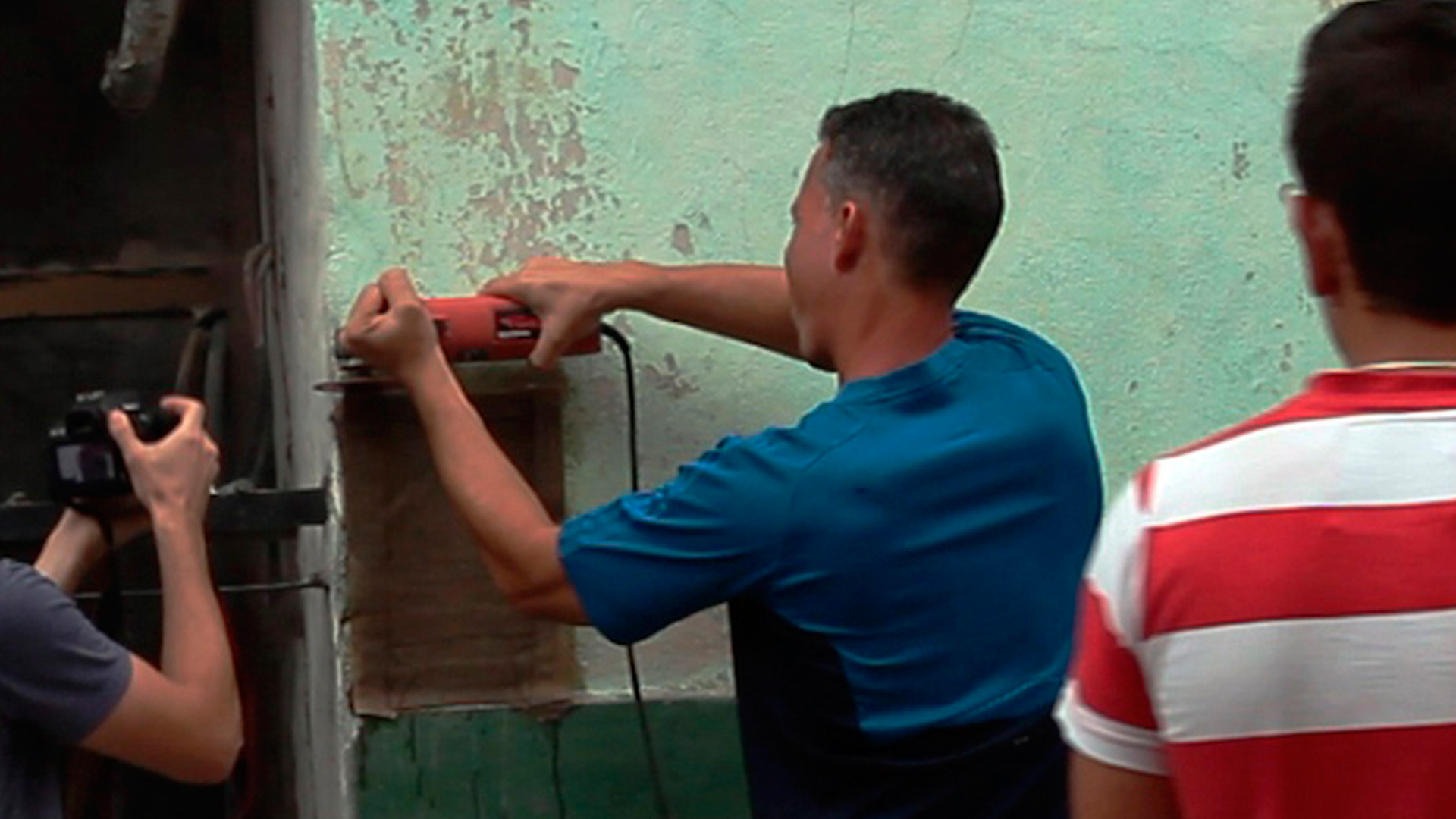 While the Spanish newspaper El País calls it La Bienal del deshielo (The Biennial of defrosting), citing the presence of Cuban émigré artists and their US colleagues, the 12th Havana Biennial has also served as a backdrop for visits by famous figures in the fields of music and performance as well as art.

A few weeks ago, the singer Rihanna was greeted with spontaneous cheers on the streets and cafes of the Cuban capital, accompanied by renowned celebrity photographer Annie Leibovitz. And not only have thousands of US visitors landed in Havana with State Department permission, international art-world luminaries like Joseph Kosuth, Michelangelo Pistoletto, Daniel Buren, and Gabriel Orozco have been part of the official Biennial program.

Now, one of the most mysterious, anonymous—and paradoxically most well-known—artists has revealed his presence on the changing island.

As always, the British graffiti artist Banksy—king of street art—did not appear in person. Instead, he emerged through the efforts of artist and videomaker Néstor Siré (b. Camagüey 1988).

While reading online accounts of the British music scene by DJ Jon Carter, Siré discovered that Carter and Banksy had spent several days in Havana in 2004, en route to Jamaica.

As the Internet revealed, Banksy left behind several graffiti works—among them, his own version of Alberto Korda’s iconic image of Che Guevara, and his “Gangster Rat” character. His stenciled phrase “This is not a photo opportunity” also appeared.

After this discovery, Siré hit the dusty streets of Habana Vieja, looking for traces of the elusive Banksy. He wrote to the artist but received no response. Finally, his efforts were rewarded. He found one of the works from 2004, blurred and deteriorated, but recognizably a Banksy—one of his “Gangster Rat” images.

In his attempts to rescue the image, Siré called in a group of art restorers and conservators specializing in wall paintings. Under the guidance of the restorers Alberto Chia Collazo and Yanira Arteaga Romero, experts on mural paintings, and the assistance of Yoel López Vargas, Rafael Gómez Pérez, and Giordano Guerra, the team removed the work using the stacco technique, which ensures image conservation.

The process was meticulously documented and recorded on video by Siré for his own Prohibiciones Producción production company.

The approach of the Biennial, with its theme of From the idea to the experience, encouraged Siré to exhibit the restored piece as Banksy’s only work preserved in Cuba.

In an email interview, Siré wrote: “I intended to create a work that cynically criticizes the art market, and more specifically the Cuban art market, which is now in a process of speculation. With the latest news on US-Cuban relations” he added “Cuban art has been opened to the world. In this moment, the Cuban context is getting ready for an avalanche of US collectors.”

Under the title Todo para vender: Banksy en La Habana (All for Sale: Banksy in Havana), the work is now on display as part of Siré’s contribution to Nano, a group show featuring small-scale works by 20 Cuban artists. Curated by Gretel Acosta, the show is a collateral exhibition of the Biennial, on view at the Teodoro Ramos Blanco Gallery in Havana’s El Cerro district.

On his website, Siré has offered the work for sale, quoting a price of $40,000. There’s just one catch: as a condition of the sale, regardless of where the purchaser resides, the piece cannot be taken out of the country.

In other words, Siré has nationalized Banksy’s Havana “Gangster Rat,” whether Banksy himself has agreed or not.

Nano runs through June 22 at the Teodoro Ramos Blanco Gallery in the El Cerro district of Havana.